l Save water, save fertilizer, save mowing, save irrigation system

l Lush and all seasons green, in drought, frost or soggy areas 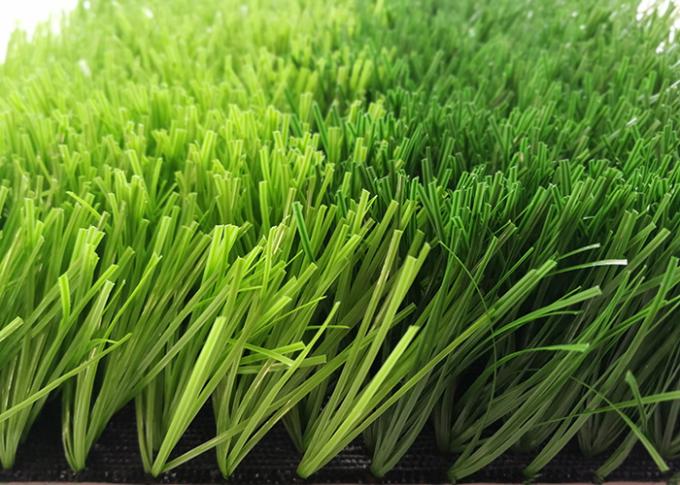 A football pitch (also known as a football field or soccer field) is the playing surface for the game of association football. Its dimensions and markings are defined by Law 1 of the Laws of the Game, "The Field of Play".The surface can either be natural or artificial, but FIFA's Laws of the Game specify that all artificial surfaces must be painted green. The pitch is typically made of turf (grass) or artificial turf, although amateur and recreational teams often play on dirt fields.

All line markings on the pitch form part of the area which they define. For example, a ball on or above the touchline is still on the field of play, and a foul committed over the line bounding the penalty area results in a penalty. Therefore, a ball must completely cross the touchline to be out of play, and a ball must wholly cross the goal line (between the goal posts) before a goal is scored; if any part of the ball is still on or above the line, the ball is still in play.

The field descriptions that apply to adult matches are described below. Note that due to the original formulation of the Laws in England and the early supremacy of the four British football associations within IFAB, the standard dimensions of a football pitch were originally expressed in imperial units. The Laws now express dimensions with approximate metric equivalents (followed by traditional units in brackets), but use of the imperial units remains common in some countries, especially in the United Kingdom.

The center circle is marked at 9.15 meters (10 yd) from the center mark. Similar to the penalty arc, this indicates the minimum distance that opposing players must keep at kick-off; the ball itself is placed on the center mark. During penalty shootouts all players other than the two goalkeepers and the current kicker are required to remain within this circle.

The half-way line divides the pitch in two. The half which a team defends is commonly referred to as being their half. Players must be within their own half at a kick-off and may not be penalized as being offside in their own half. The intersections between the half-way line and the touchline can be indicated with flags like those marking the corners – the laws consider this as an optional feature.

The arcs in the corners denote the area (within 1 yard of the corner) in which the ball has to be placed for corner kicks; opposition players have to be 9.15 m (10 yd) away during a corner, and there may be optional lines off-pitch 9.15 meters (10 yards) away from the corner arc on the goal- and touch-lines to help gauge these distances.

Contact us now to get a professional proposal for your project !