Goals are placed at the center of each goal-line. These consist of two upright posts placed equidistant from the corner flag posts, joined at the top by a horizontal crossbar. The inner edges of the posts must be 7.32 meters (8 yd) apart, and the lower edge of the crossbar must be 2.44 meters (8 ft) above the ground. Nets are usually placed behind the goal, though are not required by the Laws.

Goalposts and crossbars must be white, and made of wood, metal or other approved material. Rules regarding the shape of goalposts and crossbars are somewhat more lenient, but they must conform to a shape that does not pose a threat to players. Since the beginning of the football there have always been goalposts, but the crossbar wasn't invented until 1875, where a string between the goalposts was used.

A goal is scored when the ball crosses the goal line between the goal-posts, even if a defending player last touched the ball before it crossed the goal line (see own goal). A goal may, however, be ruled illegal (and void by the referee) if the player who scored or a member of his team commits an offence under any of the laws between the time the ball was previously out of play and the goal being scored. It is also deemed void if a player on the opposing team commits an offence before the ball has passed the line, as in the case of fouls being committed, a penalty awarded but the ball continued on a path that caused it to cross the goal line.

The football goal size for a junior match goal is approximately half the size of an adult sized match goal.

History of football goals and nets

Football goals were first described in England in the late 16th and early 17th centuries. In 1584 and 1602 respectively, John Norden and Richard Carew referred to "goals" in Cornish hurling. Carew described how goals were made: "they pitch two bushes in the ground, some eight or ten footed asunder; and directly against them, ten or twelue [twelve] score off, other twayne in like distance, which they termed their Goales". The first reference to scoring a goal is in John Day's play The Blind Beggar of Bethnal Green (performed circa 1600; published 1659). Similarly in a poem in 1613, Michael Drayton refers to "when the Ball to throw, And drive it to the Gole, in squadrons forth they goe". Solid crossbars were first introduced by the Sheffield Rules. Football nets were invented by Liverpool engineer John Brodie in 1891, and they were a necessary help for discussions about whether or not a goal had been scored. 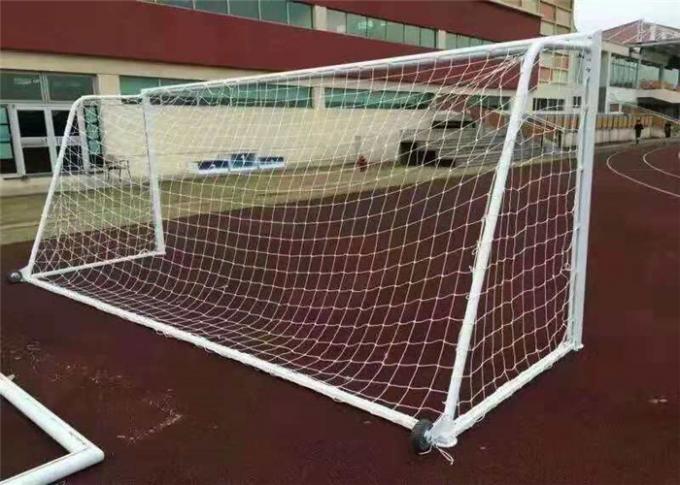